Difference between revisions of "Butaotome" 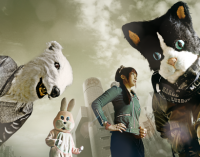 Butaotome
(from left to right) comp, ranko no ane, ranko, and paprika

Butaotome is a music group consisting of four members: ranko (vocals), comp (composition, arrangement, guitar/bass, post-production, etc.), paprika (piano/keyboard), and ranko no ane (illustration, web design). Formed around 2009, the group started out uploading cover songs of anime songs, Japanese pop music, and eventually Touhou Project arrangements to the internet. The following year, they became active in doujin event spaces like Comic Market and Reitaisai. In 2012, Butaotome also began to release their own original albums alongside their arrangement albums and, several years later, made their major debut under avex.

All songs credited to 豚乙女 in BEMANI were arranged by comp (excluding 待チ人ハ来ズ。 from ノスタルジア) with vocals by ranko and jacket illustration by ranko no ane. The member of the group who provided lyrics will be listed.