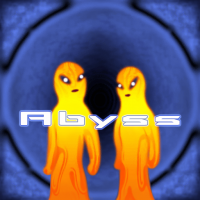 During the production of 5th style, I had to replace the sampler I used for the brunt of my tracking work; you can say that this song, Abyss, is a posthumous work created by the original.

From the rhythm parts to the voices, piano, and strings, many sounds are all combined into one vehicle, as is appropriate for its final work. Still, the old machine didn't have enough memory for all of the instruments playing at once, so I used it to get a basic arrangement of the piece, and then switched to the ripply version you hear for the new hardware.

You have unlocked the song "Abyss" by dj. TAKA. This song will take you on a journey through atmospheric melodies and driving house beats.

I'm paying dj TAKA back for a favor (he also wrote Frozen Ray for KEYBOARDMANIA 3rdMIX). Well, so I say. I just wanted to make a special video for a dj TAKA song...

So, the imagery for the video flows freely from the atmosphere of the song; it definitely isn't meant to stand alone! Engrossed in thoughts like these, I was able to, after some difficulty, bring this project to its end. I listened to Abyss while going to sleep all the time so I could get a proper feel for how the imagery should work...

beatmania IIDX difficulty rated 1 to 7+ from 5th through 9th style, 1 to 8 in 10th style, 1 to 8+ in IIDX RED, and from 1 to 12 from HAPPY SKY onwards.
DanceDanceRevolution difficulty from 2ndMIX CLUB VER. through 5thMIX (and the Solo games) rated from 1 to 9, 1 to 10 from DDRMAX2 to SuperNOVA2, and 1 to 20 from X onwards. (Ratings and notecounts obtained from BEMANIWiki 2nd.)