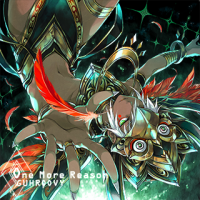 G toda U toda H toda (hereinafter abbreviated)
Hi! I'm GUHROOVY! It seems there are many who don't know how to read it, so I'll let you know here again. It's read as "Groovy".
Well, this is my sixth time to provide a song to jubeat, and my fifth time with a speedcore song. Everyone wondered "Is this going to be 10 BPM faster again?", so according to that expectation, I increased the BPM by 10 from my previous work (sweats)
The song was finished in a slightly different way, to match the concept of this jubeat, so please try playing it!

Congratulations on jubeat's 10th anniversary!
I'm very happy to participate in such a wonderful celebration.
With the theme of Greenesia, I drew an exotic boy and added elements of the bird god Garuda to an Indonesian dance costume.
It's a little dark image, but it was fun to draw so I'd appreciate if you like it!