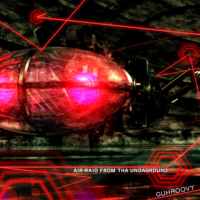 "GUHROOVY" here, and this is my first stand-alone song.
As the title suggests, this is not a pop song, instead building around an aggressive underground song.

Rat-tat-tat with the shiny mechanical guns on a shooting spree! I wanted to portray an image of the fog of war.

A high-speed dash through a cyber digital world, with neon colors and a metallic shine.

Intense tossing and turning of the body, and sensory overlap like riding a roller coaster at night.
For a song that was so fast and powerful, I did my best to synchronize the music and visuals.
I hope you enjoy this full and exciting movie.