What is beatmania IIDX 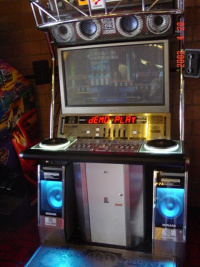 beatmania IIDX (alternately beatmaniaIIDX or just IIDX, pronounced "two dee-ecks") is a series of rhythm video games introduced by KONAMI in 1999. It is the direct sequel to the beatmania game series, and part of the BEMANI line of music games.

Under the 16:9 wide display are the start button, both effector and VEFX buttons, and effector sliders (or the touch screen in the LIGHTNING cabinets). After 9th style, there is also a cardreader in order to use the magnetic/contact-less smart card of e-AMUSEMENT. Each series produced has a different mix of new songs and older returning songs; starting with beatmania IIDX 11 IIDX RED, each style has also had a different graphical theme.

As of beatmania IIDX 25 CANNON BALLERS, two built-in cameras for hand-shooting have been added: one on the metal cage in front of the neon lights pointing at the controls, and one to the left of the screen pointing at the player(s). Initially the game would not boot up if the cameras were not attached; this was eventually patched out.

KONAMI has released 18 home versions of beatmania IIDX: 15 on the Sony PlayStation 2 game console, one on PC, and two on mobile devices. The PS2 games are stored on DVD, and can be bought with a controller that matches the arcade version very closely. The controller's key insert is detachable, so the player may attach it as preferred on the left or the right side of the turntable. 14 home versions, from 3rd style through 16 EMPRESS+PREMIUM BEST, were released in Japan between 2000-2009. The series' sole North American release, simply titled beatmania (2006), loosely uses 9th style CS as the source of its interface and system BGM, but contains a completely different songlist.

The latest non-mobile version, beatmania IIDX INFINITAS (2020), is a PC release of beatmania IIDX. It uses a unique interface based on SPADA.

The gameplay is still the same as in beatmania, with the addition of two extra keys. There are eight columns on the screen, corresponding to each of the keys and the turntable. While playing, small horizontal bars fall down these columns, and the player must press the right key corresponding to the lane as it reaches the red line. Keys 1, 3, 5, and 7 are white, 2, 4, and 6 are blue, and the scratch lane is red. Every time a key is pressed or the scratch is played, an instrument is played to complement the song. In order to hear the song correctly, the player must get the bars on the right timing. Depending on how accurate you hit the note, you will receive a rating of your performance in real time above that note, going from GREAT (a flashing one, officially known as JUST GREAT, meaning perfect timing, a regular GREAT meaning very close), GOOD, BAD, and POOR (the latter for not hitting a note at all).

The typical goal of the game is to clear the song by getting the groove gauge to 80% by song's end; clearing a song at exactly 80% is known as a "borderline". The gauge starts at 22%, and increases/decreases depending on your performance in a song. GREATs will increase the gauge quickly, GOODs will slowly increase it, BADs will decrease it slightly, and POOR will decrease it significantly. The lowest you can go on the gauge is 2%. However, depending on the game mode, gauge requirements can change, as explained below.

From beatmania IIDX 6th style onward, you will also receive a grade at song's end, pass or fail. Grade level is determined by EX-SCORE. EX-SCORE is measured by the amount of GREATs (just and regular) obtained in a song divided by two: two points for a JUST GREAT, one for a regular GREAT, and zero for everything else. You will also receive a letter grade, depending on your percentage of EX-SCORE:

There is no specific grade for achieving 100% EX-SCORE.

When playing on an e-amusement account, or on any console game/beatmania IIDX ULTIMATE MOBILE, the game will record your scores and clear status on each song. This will be shown on the song select screen as a glowing light next to the song's title, known as a clear lamp.

Clear lamps will glow depending on the best result you obtained playing that particular song.

Note that some tracks have certain charts that sound different from the original song.

Note: These are the default settings for each mode. They might be changed by the arcade operator.

The availability of the modes is the following:

※LIGHTNING MODEL cabinets only. Older cabinets use the Japanese release.

[NOTE: Due to the sheer number of modifiers available in beatmania IIDX, this section will divide the modifiers according to the category that each is placed in-game (as of BISTROVER). Older modifiers no longer seen in recent arcade games are also described here.]

From tricoro onwards, these modifiers are displayed first for guest players or new e-amusement pass users. Beginning with BISTROVER, this screen can also be disabled in the e-amusement website.

From tricoro onwards, this can be accessed by pressing the EFFECT button while on the Beginner Options screen.

From tricoro onwards, this can be accessed by pressing the VEFX button while on the Game Options screen.

The following options can be enabled by using the numerical keypad installed in e-amusement connected cabinets.

Hi-Speed is traditionally adjusted by holding the START button during gameplay and hitting either a black or white key. tricoro introduces the Floating Hi-Speed, in which adjustments are done by one-hundredth decimal intervals by spinning the turntable in a corresponding direction. A player can switch between the classic, Rootage and Floating Hi-Speed by pressing the EFFECT button or [0] on the keypad while the Hi-Speed window is open.