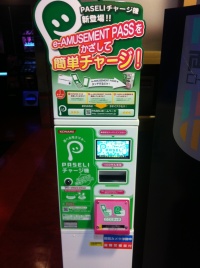 PASELI (Pay Smart Enjoy Life) is a digital currency service created by KONAMI in 2010 for its arcade games. A PASELI account holds yen (円), and can be used for paying for credits or can be used for micropayments on games supporting PASELI (before July 1st, 2016 the unit for PASELI was known as "P", and had the same monetary value as 円). Certain arcades sell 1000円 PASELI prepaid cards which can be used to add yen to your balance without requiring a credit card or BitCash.

As of April 2014, KONAMI has raised the standard price of a credit for Japan-region machines from 100P to 120P. Coin mode is still available to play on these machines; however, in most games player will be locked out of a number of features in exchange for playing at a cheaper price.

On March 17th, 2016, pop'n music éclale, BeatStream アニムトライヴ, and GITADORA Tri-Boost received an option to pay a smaller amount of PASELI to play with the restrictions of coin mode. This was added for DanceEvolution ARCADE, beatmania IIDX 23 copula, SOUND VOLTEX III GRAVITY WARS, and REFLEC BEAT VOLZZA 2 a week later, and for DanceDanceRevolution A upon release.

PASELI can also be used in PC BEMANI games such as beatmania IIDX INFINITAS and SOUND VOLTEX III GRAVITY WARS コナステ in order to purchase a monthly subscription and tickets.

PASELI is also supported by certain SEGA arcade machines equipped with e-money readers, such as ONGEKI (オンゲキ) and CARD MAKER.

PASELI launched on March 31st, 2010 with QUIZ MAGIC ACADEMY 7 and MAH-JONG FIGHT CLUB GARYO TENSEI (麻雀格闘倶楽部 我龍転生), being the only two games supporting it at that time. DanceDanceRevolution X2 was the first BEMANI title to support PASELI. All the other BEMANI titles released since then, now include PASELI support.

Prior to PASELI, KONAMI used KONAMI COIN (コナミコイン) in April of 2008. It was only usable for character customization in QUIZ MAGIC ACADEMY 5 using eAMUSEMENT. It was later renamed PASELI in September of 2009 during the location test of QUIZ MAGIC ACADEMY 7.

Adding PASELI from the Web

Note: Adding to your PASELI balance via the Web requires a Japanese KONAMI ID, as the charge process takes you to My KONAMI, which is localized and doesn't display PASELI-related options when your region is anything other than Japan. This does not prevent you from using PASELI charge machines, which are more convenient, but are still a bit hard to come across.

PASELI points (PASELIポイント) is the rewards system for PASELI, introduced on March 23rd, 2015 [1]. One PASELI point is earned for every 200円 spent in two ways:

There is no limit on accumulating PASELI points; however, on April 1st each year, points earned in the previous 12 months will expire.