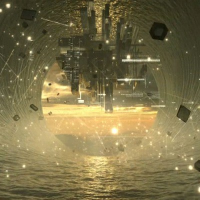 beatmania is freeform in nature, and continues to be a breeding ground for new musical styles.
I've put together all the things I'm capable of, for this series I've grown up alongside.
With this track, my friends from ALIAKE and I put forth new possibilities.
There's still many more great things to come for the beatmania series!

Tsuchiya Yuusaku here, Sound Creator and Violinist.
Here we make our debut in IIDX as Post-Japanese Music Unit "ALIAKE".
ALIAKE aims to incorporate shakuhachi, taiko, and other Japanese folk music instruments with Western music, to innovate new sounds.
With help from onoken, we have once again produced a new, never-before heard sound.
It would be our pleasure for you to play with "Space" and "Breath" - concepts imprinted within the unconscious mind of the Japanese.

It was a bit of a tight situation, since we were under heavier time constraints than initially anticipated. But thanks to support from pam and nakasima, we were able to get the video completed for this very fortunate occasion.

We would be delighted for you to enjoy our two-minute trip through various destinations.

My duties as a summoner have been completed: to call forth free surfaces from the darkness of antiquity.
For a long time, I thought that if this opportunity came along I would become a Kuroko [Kabuki stagehand].

I hope that players new and old alike will enjoy our video.

Hi, I'm nakasima.
Keeping in mind the general theme of "connections", the three of us came up with different worlds, then combined them it into one video.