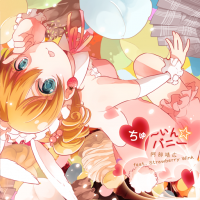 The concept is "a fantastic anime song"!
I built the melody while thinking about a story myself.
I used to watch old anime frequently and singing their songs as well, so I was able to making the song while remembering with such a nostalgic feeling.
The phrase that you remember by listening the song once is the key!
I did not know who to select as a vocalist this time.
She has sung some other songs, so that student "Miya" matches this song is perfect!
Miya's high tension vocals and dialogue are essential!

First impression when I got the song was that it was a pop song that embraced a nostalgic atmosphere somehow.
I felt excited as if I was a child dreaming of adventure and transformations.
About the image, it is something like a fairy tale or Alice in Wonderland.
However, as there is progression on the melody for the last part, I thought that it could represent the middle point between being an adult or a children.
What is important is how to express the world view with simple words and without disturbing the song itself, right? That is the point.

I am Miya, main vocalist of this song.
I talked a lot in this cute and energetic song, so I am sure you can have fun dancing!
Please play it☆
Everyone, together~, chu~in! Bunny☆bunny!! (p`・ω・´q)