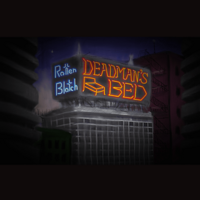 Only a Japanese translation of a snippet of DEADMAN'S BED's lyrics is listed in the GuitarFreaks V4 & DrumMania V4 Яock×Rock Original Soundtracks booklet.