This page is for the DanceDanceRevolution HOTTEST PARTY2 song titled Dreamin'. For other songs titled either Dreaming or Dreamin', please see Dreaming (disambiguation). 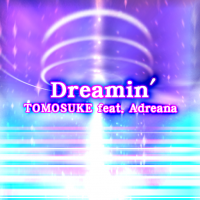 I wanted to create a song that has the same feel as the songs by the popular band, "Otome House."
The vocalist's airy voice perfectly matches this tune.
If this song is played at full volume at a club, I'm sure everybody will groove to this.

TOMOSUKE is one of the rare composers who can create songs in a variety of styles, and each one of them seems to come alive under his skilled guidance. "Dreamin'", a House music track wrapped around a beautiful vocal melody, is no exception. Adreana's soft, sultry, voice give this song the feeling of floating along a magical dream. This track will surely carry you away!