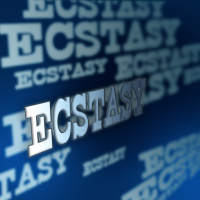 "ECSTASY" by d-complex is a driving trance song with melodic synths, energetic breakdowns and build-ups. Pay attention to your timing during the tempo changes.

DanceDanceRevolution difficulty from the 2ndMIX CLUB through 5thMIX (and the Solo games) rated from 1 to 9, 1 to 10 from DDRMAX2 to SuperNOVA2, and 1 to 20 from X onwards. (Ratings and notecounts obtained from BEMANIWiki 2nd.)