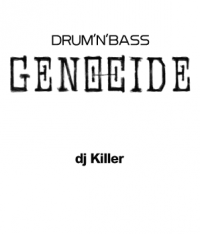 This is an aggressive drum'n'bass track that represents sadness and the possession of great amounts of weapons of mass destruction. I also put care into the another version of the song, so I want players confident enough to try it to challenge themselves with the another.

The instant I heard the demo of this song I was taken in by its intensity. Truly, this is GENOCIDE.

For this song I drew an "other self" for Tatsh, the battle-hardened dj Killer. His face, anyway ...

beatmania IIDX difficulty rated 1 to 8+ in IIDX RED, and from 1 to 12 from HAPPY SKY onwards.