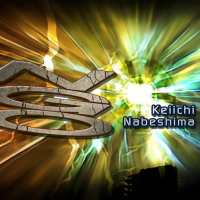 Hi! It's me, Keiichi Nabeshima.
Are you guys rockin'?
Have you tried the ultra-techno instrumental "NGO"?
How do you feel when you beat it? Is it like being a world-class player??
The "Oni" phrase at the last part of song is not only musically sophisticated but creates a very difficult challenge for the game.
I'm looking forward to hearing from the brave dancers who are not afraid of this song.