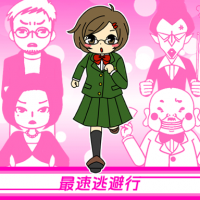 I tried to depict the subtle psychology of an older girl trying to become independent.
(This is hard, starting over↓)
It's a song about how you're at an age when you want to try a lot of fun things, but your parents are too fussy. (Huh?)
Now that I see it from an adult's point of view, I remember those days and think to myself... that (I never had a girlhood!). Well, I drew it from my imagination. But after all, this girl lives at home with her mom and dad. She knows that very well... But still wants to do lots of fun and dreamy things!

This song was also sung by "a new unit of two girls from Kansai who are high school students with a lot of fun" (that's why it's so long), "Twinkle☆berry".
Here, I would like to introduce them. Their names are Mao Tsuji and Haruna Itou. Please give them my best regards.

I asked Hagu to do the clip again. As usual, I told Hagu about the main character Tsubasa-chan's personality, living environment, school life, friendships, and other detailed settings (they have a lot of orders anyway, you know), and they did a wonderful job of drawing them. Hagu~~ thank you!
Please give my best regards to the previous "Shizuku-chan", "Yomogi-chan" from tarte, and this "Tsubasa-chan", a trio of good friends.

I'm fed up with overprotective and nagging moms and dads because I'm just too cute!
This is a story about such a girl.
It's the girl with glasses who also appears a bit in Mahou no tarte.

I can sympathize with her a little bit, because I also have memories of my parents nagging me strangely because I was an only child, and I was so fed up with it!
Of course, now I understand that it was because they were extremely concerned and cared about me, but when I was a student, I felt that they were not interested in me at all!
I wonder if one day my own children will think the same of me...
I can't imagine it...
I don't even have kids to begin with!!

By the way, the girl's name is Tsubasa Sorano.
I like her name, which can be taken as a little bit boyish.