This page is for the beatmania IIDX 8th style song by Mr.T. For the GuitarFreaksXG3 & DrumManiaXG3 song of the same title, please see Xenon (Jin Senbonmatsu). 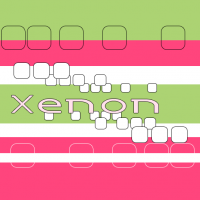 The second installment in the electroshock series, which began with ZERO-ONE. This song is also a thrilling song that spares nothing in the groovy rhythm department. Naturally I used the arpeggiator built into my synth equipment to finish off the song, but the beta version was written in MIDI. That's what makes the sound so great! (lie) Actually, I don't really get how to use it. Since these parts are all assigned keysounds, the game becomes kind of a human arpeggiator.

Note: an arpeggiator is a device or program that automatically plays arpeggios.

You have unlocked the song "xenon" by Mr.T. Invisible like the air, "xenon" is a special element that can create intense light without a lot of energy. Difficult to extract and rare in the atmosphere, the song "xenon" is much like the gas - intense but minimal, one of a kind and hidden in its own atmosphere. Be sure to breathe deeply while playing.

It was around the end of summer this year. Around the end of one of the festivals, all of the IIDX staff were watching fireworks together. The brilliantly colored sparks rained down almost unendingly, flickering in and out at high speed. Huge fireworks that looked like some sort of dangerous electrical device ... Its name is "xenon".