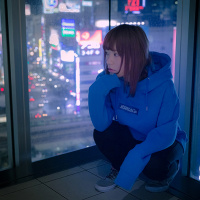 The most recent artist to make waves in the Japanese music scene, YUC'e is a trackmaker and vocalist based in the Tokyo area. Having prior involvement with artists such as yuyoyuppe, she studied music theory abroad and began releasing her own music in 2015. While she was already starting to gain traction with other producers, it was the release of her Future Cαndy EP in late 2016 that landed her on the worldwide map. She tackles several genres and styles, but is best known for her various takes on future bass music, particularly those which borrow influence from happy/UK hardcore. Alongside Yunomi, YUC'e also co-manages the future bass-oriented label, Miraicha Records.