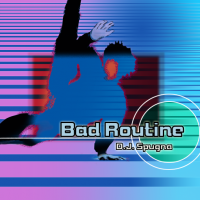 This time, I made this song by playing around with a newly-purchased analog filter.
Until now, I've always done the same thing with the way I influence a song's dynamics with the number of sounds and phrases, so wow, I was surprised.
I got this sort of dynamics with my first try with the filter. I got a little obsessed now.
Next time I want to try it on vocals.

"Bad Routine" by D.J. Spugna. Don't let the song title jinx you during your performance, because "Bad Routine" is an awesome house song that is screaming for a good routine to go with it.

beatmania IIDX difficulty rated 1 to 7+ from 7th through 9th style, and from 1 to 12 from HAPPY SKY onwards.
DanceDanceRevolution difficulty from 1 to 10 from DDRMAX2 to SuperNOVA2, and 1 to 20 from X onwards. (Ratings and notecounts obtained from BEMANIWiki 2nd.)