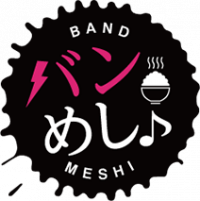 BandMeshi♪ (バンめし♪) is a media mix project that was first announced by KONAMI in 2018. It is produced by BEMANI composer Tomosuke Funaki, who also produced HinaBitter♪ (ひなビタ♪).

In Hachiman-cho, a group of girls form the band "Blanc Bunny Bandit" and carry out activities such as blogging, radio, and live broadcasting. The story is divided roughly into Seasons, and is told from their point of view.

The Shirousagi-dan (白兎団) is the central focus of the project, and consists of the leader Shirousagi-sensei along with the members of Blanc Bunny Bandit.

Shirousagi-sensei (白兎先生)
A mysterious woman who suddenly encountered the members of Blanc Bunny Bandit. The leader of the Shirousagi-dan.

Yokaze Tsuyuri (栗花落 夜風) - voiced by Tomori Kusunoki
A first year high school student and daughter of the owners of long-established restaurant "Tsuyuri" in Hachiman-cho. She is the founding member of Blanc Bunny Bandit, playing the guitar.

Chiyo Yoshizako (吉廻 千代) - voiced by Minami Takahashi
A first year high school student and daughter of the owners of long-established inn "Hachimankan" in Hachiman-cho. She is the chair of the discipline committee and the student president of her school. She plays the keyboard.

Monaka Hyakutake (百武 もなか) - voiced by Takako Tanaka
A first year high school student and daughter of the owners of souvenir shop "Momoya" in Hachiman-cho. She initially played the tambourine, but from Season 2 she now plays the drums.

Eventually, Blanc Bunny Bandit participated in the Furusato Grand Prix (FGP), which is a band competition with rivals nationwide. Girl bands from all over the country appeal their charm with local attractions and specialties, to promote and proclaim their hometown number one.

Ren Akizuki (秋月 れん) - voiced by Iori Saeki
Daughter of the owner of the Norden Marchen Grim Okoku park. She plays Little Red Riding Hood in the park, and is also the organizer of the cast. She plays the bandoneon.

Chikage Tozawa (nickname Yasha-hime) (戸沢 千景) - voiced by Asami Seto
A third year highschool student who is the daughter of a prestigious samurai family who owns a soy sauce shop. She plays the bass.

Characters or bands that have previously appeared in HinaBitter♪ will not be listed here.

Yuzuki Iwasaki (岩崎 結月)
Chiyo's friend. He is training as the next proprietress of a long-established inn in the Misasa Onsen. She lives in a town next to Kuranogawa City.

The following artists have composed songs for the project: