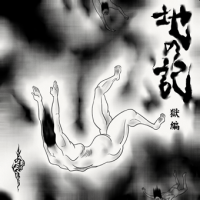 Note: Only the final line of 地の記 獄編's lyrics is written in the pop'n music ラピストリア Original Soundtrack vol.1 booklet.

I successfully produced a song with a strong sense of rock.

I'm sorry for the troubles.
Thank you very much.