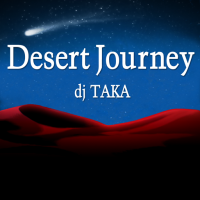 A desert town, Las Vegas. It's all about entertainment.
Las Vegas is one of my favorite cities.
The town itself is very modernized and doesn't look like a desert town. But if you look at the city from a plane or Cessna, it looks like floating in the middle of a desert.
I created this song while imagining getting out of the town and driving a 4WD exhilaratingly in the sunbaked desert. Let's drive east, to the next town.

Take a journey with dj TAKA as he creates a symphonic masterpiece for HOTTEST PARTY2! This song is filled with epic melodies, lush pads, and energetic rhythms. Everything you have come to know and expect from this unique composer.