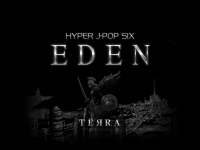 It's because I want to see the reality you're looking for, with you -

The color of the sky. The scent of the wind. The warmth of the earth. The singing voices you hear out of nowhere ...

Surely this is your "EDEN" that is sleeping somewhere. When you find it after a long, hard journey ... they'll take your hand and smile.

The ability to create a sound that either of us would not have been able to realize by ourselves is the reason TЁЯRA exists.
I've recorded many songs for beatmania IIDX that are composed of various elements blended together, but for EDEN, it was completed with a unique and strong awareness that it was good and pure "music".

TЁЯRA's original genre, "HYPER J-POP", aims to reflect the "current" sound,
and that is EDEN.