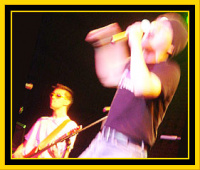 One of the most active vocalists in all of BEMANI, Handsome JET, from drummania 2ndMIX to GuitarFreaks V4 & DrumMania V4 Яock×Rock, sang a multitude of songs, KONAMI originals and licensed covers alike. His real name has never been revealed - he was always referred to in OST listings as Handsome JET or Jetto-san (ジェットさん).

Sadly, Handsome JET died in May 2008 in a traffic accident while riding a motorcycle. The news was kept private and was not revealed until January 15th, 2009, when it was posted on a blog of one of his close friends on the SAFETY SHOES website. (Incidentally, Toshio Sakurai, one of the band members, was the composer of Handsome JET's earliest songs in GuitarFreaks & DrumMania.)