Not to be confused with 霊魂爆砕 -SOUL EXPLOSION-. 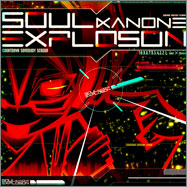