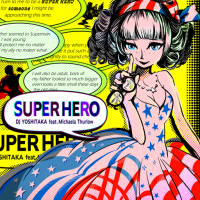 When I was a kid, I thought my father was Superman.
He always stood by me and protected me no matter what happened.

I have become an adult and his back that used to look so big looks kind of small now.
Maybe it's about time for me to become someone's super hero.

I wanted to convey such message with this pop, energetic sound. I hope everyone will like this.

A light-hearted dance tune that will surely have you smiling. A young girl's ode to the greatest idol in her life - her dad!