TORIENA's husband has requested in the past his wife's real name not appear on this wiki. Thank you. 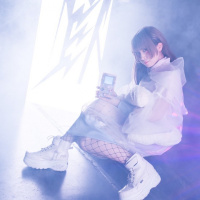 TORIENA is a driving force in the Japanese chiptune scene, specializing in chiptune-based electropop, EDM, and hard dance tracks. Despite her short time composing chiptunes, she has quickly become one of the biggest international chiptune sensations. She is signed to TOY'S FACTORY and also co-owns the Kyoto-based label MADMILKY RECORDS alongside NNNNNNNNNN.

As opposed to a hybrid style of chiptune used by artists such as Chroma, TORIENA's chiptunes are more traditional and true to the form. Her main instrument of choice is the Game Boy, citing its ability to play sounds directly from the built-in sound chip as a reason for preference. On top of writing songs, she often provides vocals and even artwork for many of her own works.