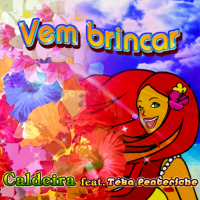 TOMO-chin, who loves Brazil more than anybody I know, said while eating Indian curry, "I can't get Brazil out of my mind...".
So I say, while drinking my Lassi, "What!? How did Brazil cross your mind while you`re eating Indian curry!?
Unbelievable!".
That was the moment the song was born.
It's a Brazilian House track blessed by the God of Curry.
The sound of its birth was so loud that I said, wide-eyed, "Meow, meow, MEOOOOWWW!!"... and then TOMO-chin sadly shook his head...

This track was born while I was eating Indian curry and thinking of going to Brazil.
After that I found little gaps in Yoshi`s determination (he had previously refused my wish to join the Pirates).
Although I only play the electric piano on this song, my longing to visit Brazil and my pity towards the Pirates are beautifully woven into it.
When I played it for Yoshi, he exclaimed, "Meow, Meow, MEOOOWWW!!"
And I said, with coffee on my hand, "When did you overcome your allergy to cats!?" We fell into an awkward silence...