Not to be confused with C-Show's album, HOLIX. 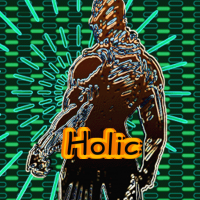 Here is TaQ's latest production, the hard techno song Holic. By the way, a lot of people have been asking, "How do you pronounce TaQ?" The correct answer is "Taku". In German, Q is pronounced like "ku". TaQ spent his childhood years in Germany, and it looks like "TaQ" is a favorite nickname he picked up there. I think there are a lot of people who think TaQ's works have a certain German techno feel to them, including Holic; this may be why.

You have unlocked the song "Holic" by TaQ. If you like the words "dark", "fast", and "hard techno", then you should also add the word "Holic" to your list.

The catch copy for 3rd style is "CYBERbeatNATION"; it seems the songs that express this particular world view the best are probably dj TAKA's LEADING CYBER and this song, "Holic" from TaQ. If I had to say why, it's because they're songs that give you a very dark feeling with faltering or becoming depressing; they're both song that are overflowing with a violent energy that seems to suck you in.