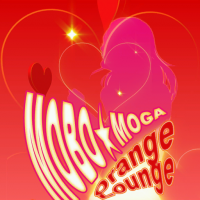 I like girls (laughs), so I tend to write songs which girls seem to like.
For this song, I tried to accumulate the piano line in the intro, quality vocals, bossa-like rhythm and acoustic guitar, and French items that girls would like.
It's so moody, isn't it!
"Mobo★Moga" is an abbreviation of "Modern Boy・Modern Girl", but this song title is directly taken from a delicious restaurant in Shibuya called Mobo Moga that I used to visit.

"MOBO MOGA" by Orange Lounge is an enjoyable blend of bossa-styled sounds and vocals with drum'n'bass land lounge. "MOBO MOGA" is very fun to dance to and has timeless appeal with its very catchy melodies.

These twins are 19 years old and type B. Tart (blonde hair) is a patissier, and Toffee (brown hair) is studying to become a web designer.

These characters are from a certain beatmania IIDX 5thstyle song. The animation is also based on the IIDX original.
These characters have also appeared in a certain Gitadora game, and before I knew it, they were on four different games including IIDX. Wow.
Best regards to the Orange Lounge festival, and please enjoy the other games.

It was a very cute song, so I made a video using twin girls with a theme of a "POP LIFE-like playing house" (because the two things that are symmetrical is a cute image).
...However, during the latter half of production, I realized that the title meant "Modern Boy & Girl".... disappointing.