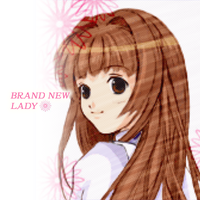 I made this song with a "typical mid-tempo JPOP" concept.
I think that the vocals, orchestra and chorus matched well, so it became a cohesive song.


I hope you enjoy it.

Hello everyone, it has been a long time.
It is time to introduce this song.

Well, it is "BRAND NEW LADY".
I made this clip wanting to make it like my own's "SMILE FOR YOU".
As the girl from "SMILE FOR YOU" was very refreshing, I thought that this time I wanted to make a pretty girl.
I wish I could express a very fresh and refreshing image of the song... So how did it turn out?

GF/DM difficulty rated from 1 to 99. (Ratings obtained from BEMANIWiki 2nd.)