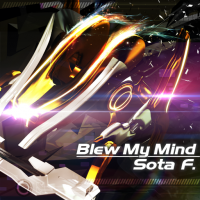 Blew My Mind is a song that I had made earlier, but the song title was yet undecided.
So I consulted with TAG, and he said, "How many times? Song titles that end with a "do" so that they can appear in an event and the like, but what else?" And I got his advice.
Of course, Blew My Mind does not follow the lines of DDR!! Also, I decided to name this song "Blew My Mind". By the way, we've heard "1,2,3,4" and "DDR" in the song. Please give it a listen.