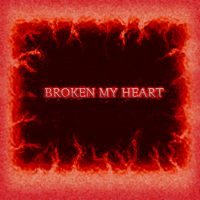 This HYPER EUROBEAT song is brimming with the expression of being driven crazy from the sadness of a broken heart.
The lyrics to this song are linked to that of CAN'T STOP FALLIN' IN LOVE, so I hope people will take interest in finding the connections between these two.
And the conclusion to this story can be found in the lyrics of LOVE AGAIN TONIGHT from DDR4th MIX and ParaParaParadise.
This is the second piece in my NAOKI euro line of music.

"BROKEN MY HEART" by NAOKI Feat. PAULA TERRY is a fast Eurobeat song about the ups & downs of love and relationships.