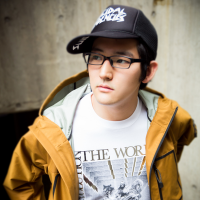 DJ WILDPARTY is a Japanese DJ who first appeared in the music scene in the late 2000's. WILDPARTY often performs at various venues in Tokyo and throughout the country, acting as a resident DJ for the CIRCUS Tokyo event series, AUDIO TWO, and being a frequent guest at various events held under the Akihabara club, MOGRA. With USAO, he forms the Shot Bass Idiots group where they release megamixed compilations and trap and jungle terror tracks as well. While he hasn't composed any songs in BEMANI, he was an active effector in the first two SOUND VOLTEX games.