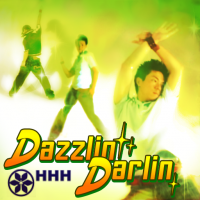 It's been a while. I am Ryu☆, and for the group HHH, I am in charge of the land. Have a nice day.

Sparkling. It's nice, that sparkle. Do you shine lately?
I like romantic relationships, with their sparkling to and from.
It's always a struggle between love and war.
So, yes, this song shares a theme with TROOPERS.

So, "Dazzlin' Darlin" is a catchy yet kitschy song.
The song sparkles. So does the movie.
When you stand in front of the cabinet, you'll meet the Dazzling Dai-chan with his dazzling dance, 8-6-4!
Well, I can at least shine a bit anyways. Let's Dazzlin' Darlin!