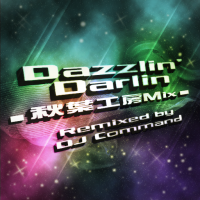 This song is a new remix of Ryu☆'s song Dazzlin' Darlin.
I did not dream that I would ever go into an arcade and hear a remix I made...

The original song was in an energetic and lively atmosphere, so I decided to add some euro elements to the song.
This meant adding more aggressive lines to the song, but I also wanted to aim for a more casual crowd.
If you'd like to listen to this, turn up the bass, but not too loud (so as to not disturb the neighbors).