This page is for the GITADORA Tri-Boost song named Gai. For the designer of the same name, please see Gai (designer). 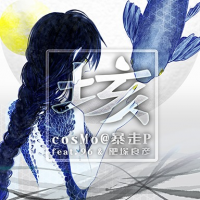