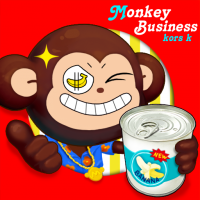 Lately, Dubstep has exploded in popularity all over the world, to the point of reaching a state of oversaturation. It's at the point that you'd ask yourself, "Is it alright to make another dubstep track now?" since Trap has been on a boom and taking over.

In Monkey Business, I created a song that's Hard Electrik (Hard Dance + Electro) with Trap. It's a sound rapidly gathering an audience, blending Hip Hop, Dubstep, Hard Style, and Juke. Being a fan of trendy music, how could I resist?

The title "Monkey Business" (which means "trickery" and "deception") due to the evil gangster image of hip hop as well as the primate-like noises of the synths at the beginning of the track. I think it's a bit more subdued than my works on other series, but DDR gave me the chance to make the music I wanted to at the moment, so I was able to have fun in the creation. The game's sequence data incorporates that stomping dance step found in juke. It might challenge your stamina, but I hope you all enjoy it.

In kors k's words: the genre is "Trolling Ook-Ooky!"