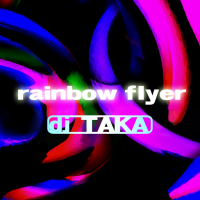 Lyrics are from the long version of rainbow flyer. The game size version does not have vocals.

This tune came to be independently.
Of course, the people who hear it gives some output on it, but how I felt, with the freedom to respond on what I thought of the music, was something that no one but yourself can eventually make the tune sound like.

But at the moment, after hearing some of the responses, what's funny is that the sad song's pitch (minor) with the pitch that leaves a bright impression (major) gets overcome, and it pierces you with emotion that makes you feel better, brighter, and more powerful.

Perhaps that theory is biased that with the majority of the impressions this song has left, but I still feel that my heart was moved after hearing this song, like a tranquil breeze.
Those who hear this song, I believe it is one of the more lighter-spirited songs I've made, seeing as I have performed it live in several events, and it is something that's sunk deep inside of me now, and it's image is constantly the roots of what I think about lately. I can picture that even when you get the impression that you are lonely, you can still look up and have some hope.

This song was a bit of a concept, as after 4th style, it was a turning point, because my Trance music had a supposedly recognizable style that people noticed, and lots of my songs have have a brighter image pitch (major), other than Colors.
However, there are strictly darker tunes that I have made, too, and the control of thesong's melody and atmosphere took a lot of work to compose properly.
Looking deep into things is not always a good way to look at the world, but the feeling of kind entity that flies across the sky leaves a very positive impression.
So in these sense, "trance" is like the river of my life which traces back to a long time in history, and even if it's a little thing, just like a genre of music, not doing well isn't always an excuse, no matter how little of a subject it is.

But, these releases, style by style, always have a trace of the name "dj TAKA", which means a lot to me.
At a glance, when I get that people like to play and listen to my songs, it is very flattering, but sometimes, you get the impression that in a way, some people tend not to say the truth, and are reluctant because the work that I do is raw trance, and perhaps I don't have much talent for other genres or styles....

But, my story is still going, and it's still going quite strong. Normally, I don't to think deeply about these things, because it's not always easy to find the answer, and because sometimes it can really mess with you train of thought!
But, while I made an attempt to make this song, we didn't actually think of the song name at first. But while we made the movie, we compiled some data together, and we decided the song name a few days later.
The image depicted from the song was an array of beautiful, vivd colors, like a flier from the future who faces the rainbow, and flies through the sky. So, this song kind of have two meanings in a way.