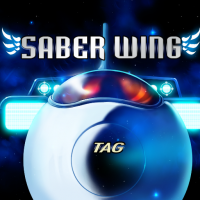 Hello all beatmania IIDX fans! TAG here
I thank you all for the popularity of SABER WING and its inclusion into the game!!!

The song was originally made for DanceDanceRevolution X, and for this song, we incorporated some unique rhythms and a changing BPM gimmick.

I added the BPM gimmick because I felt that the song should coordinate with the moves a person made, and the DDR team also requested me to make a song with some tricks in it.

This is based of a story from Macross, in which the space fighter "Saber Wing" travels through space, encountering many scenarios. (?) It's a bit of a complicated story, and I tend to linger on about too much on it.

This is TAG's debut release on DDR. Its unique and catchy rhythm stay on everyone's mind once they hear it. Its peculiar sound is formed by interweaving 3-beat and 5-beat patterns, and creates an illusion of floating in the air for the listener. You won't find such a feeling in other songs! Can you follow its roller coaster BPM and tricky rhythm?