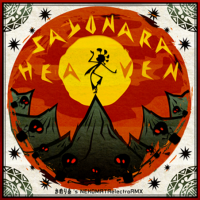 Hello! My name is Camellia. Thank you for accepting this work into SOUND VOLTEX BOOTH.
Of all the composers, Nekomata Master is my favorite. I always hear "Camellia really likes Nekomata Master, huh?" from others. If someone walked up to me and asked "Pick one song from all of the compositions in the IIDX series to remix", I think I'd have to go with Sayonara heaven.
The tune rushes off at 150 BPM from start to finish. I hope that you feel the passion flooding through this track.