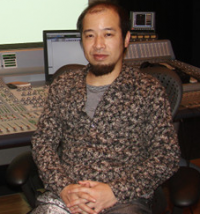 Sotaro Tojima (born July 8th, 1971) was a KONAMI composer known for his works in games like Castlevania: Circle of the Moon and the Metal Gear Solid series, starting in Metal Gear Solid 2. In BEMANI, Sotaro provided vocals for a couple of BEMANI songs, and he also composed for pop'n music GB.

Sotaro left KONAMI in the early 2010s. He currently serves as an audio director for Microsoft's 343 Industries studio, and he worked on the soundtrack of Halo 4.