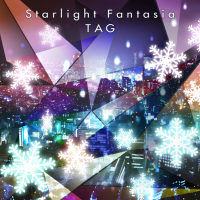 Night view of the city while the snow falls dancing.
This is a story about happy people walking, illuminated by the city lights-----

That time I was vaguely watching from the company window.
There was a time when I was called a jealous king (self-proclaimed), and even then, I was envious of everyone having fun. I had a lot of work.
I sublimated the negative energy into a song.

People with cold hands talk about warm hearts, so maybe the song suddenly got brighter on the end because the composer's heart was dark. (laughs)