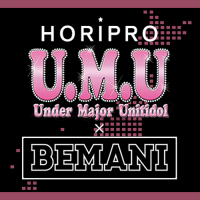 U.M.U × BEMANI was an event between BEMANI and a division of the Japanese talent agency Horipro to promote Gotochi Idols (ご当地アイドル, local idols). A selection of 25 participants' songs for the U.M.U AWARD 2014 and two new original songs by BEMANI artists for the winners of 2013, 水戸ご当地アイドル(仮) were added to three BEMANI series: DanceDanceRevolution (2014), jubeat saucer fulfill and REFLEC BEAT groovin'!!. A total of six updates were made from May 14th, 2014 to August 13th, 2014 and each update usually included songs from specific areas. Out of the twenty-five participants, thirteen of them were selected to be a part of the ALL JAPAN SELECTION 2014 on November 27th, 2014. The eight finalists were then chosen out of the 20 finalists and finally, 乙女の純情 won the U.M.U AWARD 2014 on December 30th, 2014.