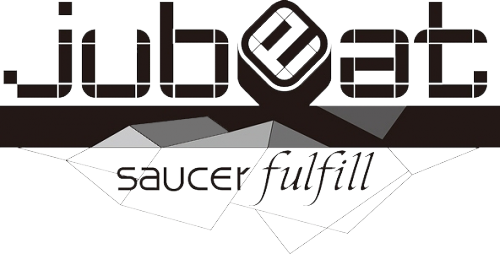 All U.M.U songs, aside from MITOれて！いばらきっしゅだ～りん and LoveLove DokiDoki, are licenses.

The Tenkaichi otogesai event is a collaboration tournament between KONAMI, BANDAI NAMCO, SEGA and TAITO. A song from the GROOVE COASTER, jubeat, maimai and Taiko no tatsujin (太鼓の達人) music game series were crossed over to the other games, along with a brand new song written by a composer representative of each game series.

To unlock songs, you need to get coffee beans. Once you have enough beans to make a coffee, you can get milk to pour into the coffee. Completing the latte art using the milk will unlock a song.

Only songs new to jubeat saucer fulfill are listed below. Songs are listed in unlock order.

For more information on this event, and a list of games involved in it, please see its own page.

To unlock バンブーソード・ガール and 幻想系世界修復少女 permanently, you have to play the songs at least once between June 26th, 2014 and July 14th, 2014. Idola can be unlocked by getting all the reward stamps from the Smith Seminar Natsu no jin (スミスゼミナール夏の陣) event.

These songs were added to jubeat saucer fulfill on June 26th, 2014, all involving the VOCALOID GUMI.

The PON no unmei jouka keikaku (PONの運命浄化計画) event started on December 24th, 2014, to commemorate the release of the Power Of Nature album. For more information, please see its event page.