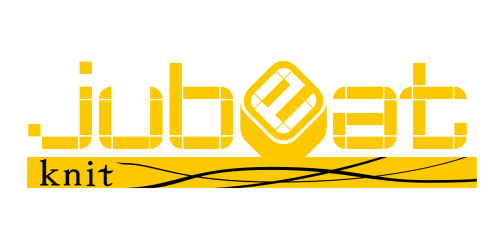 The top 10 KONAMI original songs for the previous week can be found at the ranking page on the official website.

The top 10 licensed songs for the previous week can be found at the ranking page on the official website.

knit Shirt (ニットシャツ) is jubeat knit's unlock system. Songs, markers, and backgrounds are unlocked by collecting WOOL. WOOL is earned through ACHIVEMENT POINTS (AE), based on the sum of TUNE POINTS earned for each song on TOTAL RESULT after the end of a playthrough, and POINTSs earned by collecting titles. Please see BEMANI WIKI here and here for a full listing of ways to get POINTs. WOOL requirements vary by song, and only one WOOL can be applied per playthrough, regardless of how much WOOL you have. WOOL costs approximately 4200 AE.

There are seven colors of shirts: WHITE, LIME, DANDELION, CRIMSON, INDIGO, RAINBOW, and BLACK. Only WHITE is initially available. After unlocking its one song, you can then choose between the next four colors. Once all five colors' unlocks are completed, you'll move on to RAINBOW. Unlock the one song in it to move on to BLACK. Unlocking its one song ends the event.

(Note: INDIGO is used to unlock songs and markers from jubeat and jubeat ripples for one wool each. If you already unlocked everything in those games, it will not appear.)

Only songs new to jubeat knit are listed below.

The following song has received a difficulty change since its last appearance: