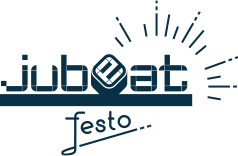 From January 4th, 2021, all emo currencies have been unified.

(Note that True Blue [ 2 ], 1116, and XENOViA can also be obtained through the Music Conduction function.)

These songs could also be purchased with T-emo via the T-emo STORE from January 6th to February 3rd, 2020.

As of April 27th, 2022, Our Love, RAISE YOUR HEADS UP, and ゆめのかなたで can be purchased at the festo STORE.

The following song could be unlocked by entering The 9th KONAMI Arcade Championship and playing jubeat festo once during the time period when it is available.

A second part of the event, Otodoke! Torokko daisakusen 2 (おとどけ！トロッコ大作戦2), started on July 3rd, 2020 and ended on July 26th, 2020, featuring new crossovers and a brand-new song.

The Mission Travel unlocking system started on September 18th, 2020. Each map has PHASE LINEs with up to six locks each. Each lock has three missions, and by completing them you can unlock a new song, T-emo, or bonus tune gauge. Completing all missions in a PHASE LINE will advance you to the next PHASE LINE.

As song or in-game items are assigned to each lock randomly, "Compass" can be used to reveal a lock that can be selected to unlock a song for current PHASE LINE. 800 T-emo is needed to use a Compass in each PHASE LINE.

The table below only lists new songs/charts.

The following song could be unlocked by having played ten credits of jubeat festo from December 24th, 2020 to January 22nd, 2021. It will be available on your next credit.

Stamp Challenge is an unlocking system that allows players to unlock mostly old songs/charts, with the occasional new song. Players can get one stamp per credit, and up to four stamps per day.

The table below only lists new songs unlockable through Stamp Challenge.