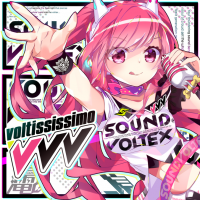 A high-difficulty song with a sense of speed, exhilaration, and presence.
Within the maelstrom of sound, the light of an interwoven infinity.