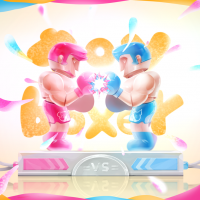 Super heavyweight fun!
The battle between the lives of anonymous boxers
The fate of the title bout
And the verdict is...