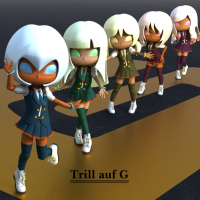 Attack of the high-speed trill!

Reflecting on the past and learning new things.
An etude for the 7 keys and disc.