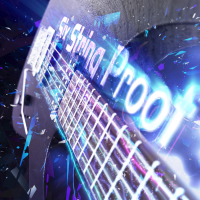 The song of all songs, written for all those who love the sound of rock music.
Feel the ultimate air vibrations woven by twin guitars.