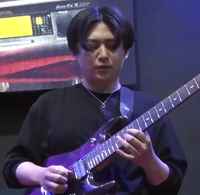 Yuya is the newest musician at KONAMI. He first made an appearance in a stream promoting KONAMI's newest employees. He joined KONAMI in April 2018. Prior to joining KONAMI, Yuya performed under the name Matthew, where he participated in G.O.D. COMPETITION 2016.

Following Mutsuhiko Izumi's departure from KONAMI in 2019, Yuya has taken his position as a staff member in the GuitarFreaks & DrumMania series. As of GITADORA HIGH-VOLTAGE, he is the sound director of the series.

Since many Yvya songs feature guitars, only songs not composed or arranged by him that he provides guitars for are listed.